55 replies to this topic

We have only one rsync thread running on /usr

R3 is online and happy on the new cluster.  Thank you very much for your patience during this work.

We do not expect any issues as a result of this migration as the Operating System, Control Panel, Files, Daemons, everything are exactly the same as they were.  In the event that you do run into anything odd do please reach out to support.

So, what is next ? Only 6 days left until 15 of September for the rest of us, as your email initially was about.

So, what is next ? Only 6 days left until 15 of September for the rest of us, as your email initially was about.

Due to the overwhelming success of this latest migration we'll be reaching out on Monday to clients to schedule the rest of the transfers.  It is possible that we may have to push some transfers past September 15 in order to avoid trying to move too much data too fast and choking our former storage platform but we're going to get everybody moved as soon as possible.  We definitely do not want to go past the end of September otherwise we're going to be paying for both the old storage platform and the new one for an additional month.

I'm providing some graphs that show disk i/o latency both before and after.  Keeping in mind that these are logarithmic these are pretty massive improvements in addition to the stability of the graphs after the upgrade

SDA is the "/" folder on the server - basically everything besides MySQL and the "/home" folder which stores user data.

SDB is the "/home" folder on the server - which stores your home directory, account data, php files, emails, etc.

SDC is the MySQL folder on the server. 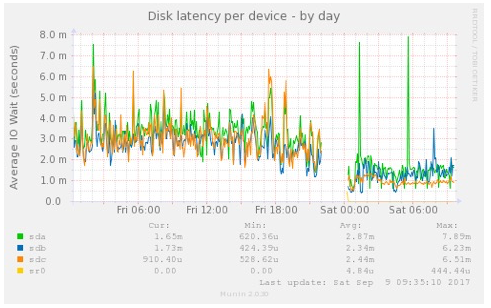 This graph is for the root folder of the server, "/", and the green spikes do not affect the performance of client sites in any way.  They are from scheduled tasks that run on the server that are very I/O intensive such as accounting, bandwidth tracking, etc. 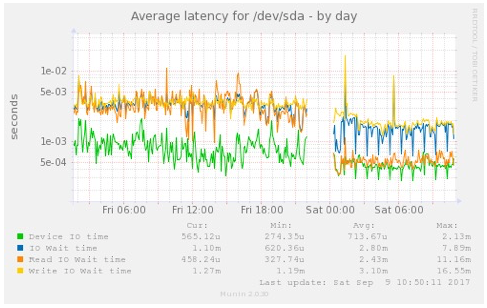 This graph for SDA, the root "/" folder, shows the average latency on reads and writes have gone down as well as the I/O wait time - again this chart is logarithmic so it's a pretty large improvement. 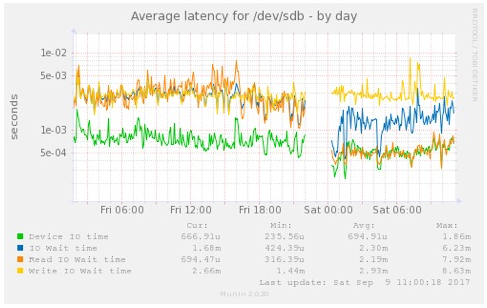 This graph for SDB is for the "/home" folder - the blue line for IO wait is much lower and everything is substantially lower beyond the write IO wait time.  This is to be expected as we are replicating 3 copies of the data on every write for redundancy against failure.  Reads are substantially faster and more consistent. 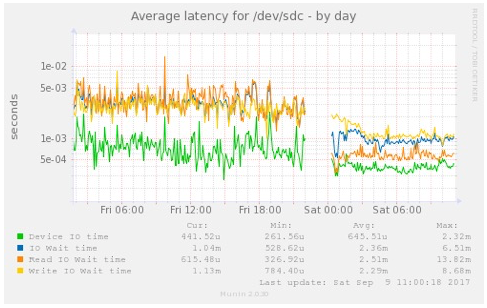 This graph for SDC is for MySQL and it is plainly obvious that all of the metrics are lower [lower is better] as well as more consistent.  MySQL actually has one of the largest impacts on the performance of dynamic sites like WordPress, Joomla, Drupal, Magento, etc...  This is a massive improvement in both consistency as well as speed.

Just to be sure, I can post and make changes to my sites like I normally do until the offline sync of data, right?

Just to be sure, I can post and make changes to my sites like I normally do until the offline sync of data, right?


As a general rule: Yes.

To be safe, I'd suggest to save your work and disconnect a few minutes before the shut down. Imagine you are writing a blog post, and need to press save. You're writing and everything is going swell, but we do the shut down a few minutes before you finish. You hit the save button and...... you get a connection error. Depending on when you last saved, some work could be lost.

After some time has passed on the new platform here's an updated graph showing this weekend as well as most of today on the R3 server as compared to the old storage: 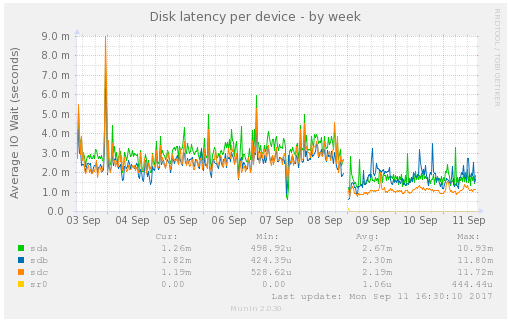 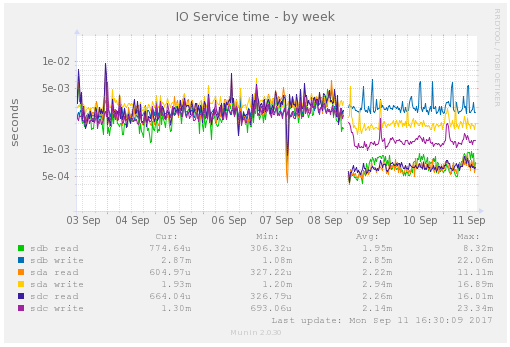 Lower is obviously better - the top 3 lines in the second graph are the writes to disk.  The bottom 3 lines are reads from the storage.  Writes will be slower than reads due to the data duplication for redundancy but even with this - the overall performance is very much improved.

I do want to clarify it is R2 that is scheduled for tonight 9/15.  I am already started the prework for that and it will be going offline at 10PM as scheduled.

Thanks for all that your team does. I've never experienced such great support before, from ANY provider.  Keep up the great work!

Hope R2 goes smoothly tonight and i'll be ready on the 23rd for the R1 xfer.

Just curious what the migration plan/schedule is for S1. Apologies if it's been answered elsewhere.

We are hoping for the 24th for s1.  However, that will not be officially planned until all three transfers succeed this weekend.

The R2 server transfer was successful.  That makes 2 servers migrated so far - R2 and R3.  S2 is tonight [Saturday] and S3 is tomorrow [Sunday].


0 user(s) are reading this topic